Hey guys! It's time again for a new season. This time I went all out! Read all about it below.

What is transferred from S2 to S3?

Season 3 will last approx 3 months, after 3 months we will run a poll on the discord asking you guys if you want to extend the season an additional month or not. If the vote wins by a majority of 75%, we will extend it. If not, then we will start the new map.

After long consideration, cell top will now be done on a weekly basis instead of BiWeekly. This will keep the server more fresh, more fun, and more money to be made! Below are the rest of the changes.

Complete pet revamp, now pets are more exclusive, more overpowered, and a lot more fun. Pets start at level 1, to level them up you drag a pet of the same type, and equal level. Combining them will level it up. The only other way to level up your pet is by combining an Amethyst pet with it.

We now offer 16+ Parkour stages that yield amazing rewards ranging from millions of gems, tokens, and trillions of dollars. Additionally, we now have leaderboards for all 16 courses. More courses will be added mid season, so go flex your best scores!

You can also use shortcuts to get to each stage such as /parkour1, /parkour2, /parkour3 and so on. You have to complete the courses in order, and the rewards are as shows below.

This season SPACECELL Mines are fully upgradeable, you can invite friends, and they're super OP and fun. 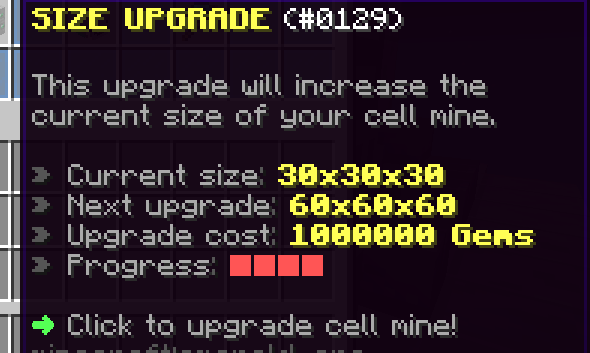 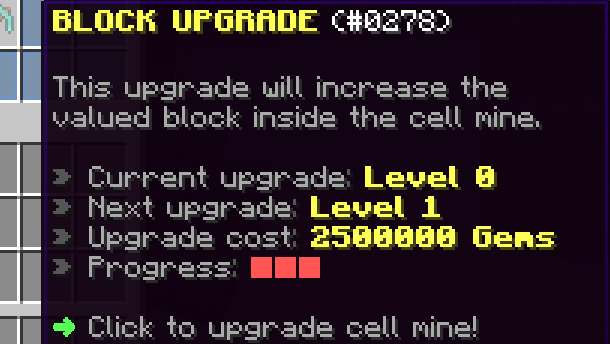 Voting was something that was very simple, didn't have leaderboards, wasn't that helpful, and to be honest was somewhat boring. So I threw it all out of the window, and here we are.

Pvp has been completely broken ever since our release, swords one shot people, and ruined your armor way too quickly. So I went ahead and fixed that, and did some other major changes.

Do you ever get tired of mining, grinding, and prison in general? Well, I've decided to fix that if you do. Time to get spicy. Every 3-4 hours a SPLEEF event will now start, and the prizes for winning is a guaranteed random key. You can win anything from a rankup key, to an Apollo. Once this is tested more on the live version, I'll had skywars, hunger games, and much more to the random events sequence. I'll also make them occur a lot more frequently.

A lot of the things in this new season were CORE CHANGES I've had to make for a while. Now that this is out of the way, we can jampack new content into future seasons such as new enchants, pickaxe prestiges if requested, and so much more.

I spent hundreds of hours on this season, and I really hope it's something you guys will enjoy.  - bless xoxo lunar :)

Hey there, just updating everyone real quick with a list of the latest and greatest updates here at Space Prison. Full list of changesSponge / Beacon rewards from prestige crate are

Howdy boys n girls, time for a quick middle of season 2 intermission. I've done a lot of updates and feel like this post will be pretty long, make sure

We strive to be a top prison server. We always put the community, and the player first. If the community wants something changed, we change it. If they want something added, we add it. The player feeling at home is our goal.

On our store we offer a wide variety of packages, ranging from as small as a cosmetic tag, all the way up to a full Rank Package that includes shops, mines, with tons of perks! Each donor rank will grant access to progressively better perks!